Lets start off talking about the Perseid Meteor Shower, one of the most potent of the year. You can see Perseids throughout the month of August but the peak occurs during the second week or, more specifically, the evening of the 11th into the morning of the 12th. The good news this year is that Moon is out of the sky, for the most part, leaving dark skies for meteor watching. Lets hope the soot from the western wildfires will have been cleansed from the atmosphere to reduce hazy skies. The good news about meteor watching is that you need no equipment, save for maybe a lawn chair. At the max, you might see an average of two meteors per minute. Set-up that lawn chair so you can pretty much see straight-up. See the “Club News” section about an observing opportunity. The Perseids result from the Earth plunging through the debris trail of Comet Swift-Tuttle. Starting with the evening planets, technically Mer[1]cury is in the evening sky, but the view isn’t favorable. We have had two pretty good evening views of this elusive planet so maybe we’re spoiled. Greatest sepa[1]ration occurs in mid[1]September but, even at the end of this month, Mercury is setting in the evening twilight just under an hour after sun[1]set. Look really low, just after sunset, in the west[1]northwest if you want to give it a shot. On the evening of the 18th, Mer[1]cury passes Mars, miss[1]ing it by 0.1 degrees, but the pair will be tough to see. On the other hand, Venus is more recognizable due to its bright[1]ness. All month Venus sets about 90 minutes after the Sun or about the time full twilight ends. It does appear to move fur[1]ther to the left, along the horizon, appearing due west near Au[1]gust 8th. The crescent Moon is to the right of Venus on the evening of the 10th. Watch each night as Venus appears to head for Spica; the two will unite next month. Both Saturn and Jupiter reach “opposition” this month, on Au[1]gust 2nd and 19th respectively. Of course, opposition is when an outer planet is opposite the Sun from our point of view. So think about being in your backyard. If the planet is opposite the Sun, it must rise as the Sun sets and be visible all night. Given the Earth and the planet are on the same side of the Sun, it means the planet is relatively close to us so it appears bright and large through a telescope. Look for both Saturn and Jupiter in the southeast. Jupiter rises about an hour after Saturn and is much brighter. The Moon scurries just south of both planets on the 20th and 21st of August. Given the Moon’s orbit is off the ecliptic by 5 degrees, you can see this difference giv[1]en the Moon will be about 4 degrees below these planets. August 22nd brings the full Moon. This month it hap[1]pens to be a “seasonal blue Moon.” The definition of “blue Moon” was altered long ago. Think about this. Normally we have one full Moon a month. There are four seasons in a year, three months each. So normally we’d expect to have three full Moons in a season. But sometimes there are four. When that happens, the THIRD full Moon of the four is called a “blue Moon.” In 1946, an article in Sky & Telescope magazine talked about the “blue Moon” being the second full Moon in a month’s time and that erroneous definition stuck. So, to be clear, August’s full Moon Is a “blue Moon” by the tradi[1]tional definition. The Moon won’t look blue and, in fact, there will be nothing special about it. But go look anyway!

Looking Up This Month  July2021

Have you seen Venus in the west-northwest yet? It’ll appear like an airplane coming in for a landing but it never reaches the airport. Venus’s set time is right around 10pm CDT all month, about 90 minutes after sunset. Things get interesting starting the evening of July 9th. Venus and Mars will approach each oth-er with Venus being much brighter (magnitude -3.8 compared to +1.8 for Mars). Venus is getting hither while Mars is sinking towards the Sun. On the evening of the 11th, a thin crescent Moon joins the pair with the Moon being five degrees to the right (see the image). On the 12th, Venus and Mars are closest at 0.5 degrees. Venus seems to not get too much higher but heads southward, near-ly parallel to the horizon. The planet comes to within a degree of Regulus on the evening of the 21st. Mars is close to Regulus on the 29th, but this pair is really low after the sun sets. By the end of July, Venus is nearly due west. And you can pretty much say “see ya” to Mars for a while as it appears to pass behind the Sun. Officially this doesn’t happen until early October but Mars is low enough that it won’t command much attention.

You don’t need to wait too long to see another planet. As July begins, Saturn rises in the southeast right about the time the evening twilight leaves us. By the end of the month, Saturn is rising right about the time of sunset. In fact, Saturn’s opposition occurs on August 2. Of course you’ll have to wait a little while for the ringed planet to get high enough to train a telescope on her. Saturn sits in the star-poor constellation of Capricornus, so, at magnitude +0.37, it will be the brightest thing in the southeast, at least until Jupiter rises an hour later. The Full Moon is near Sat-urn on the 23rd and makes a triangle with Jupiter and Saturn the next evening.

Lastly, we should mention Mercury which inhabits the morning sky. Greatest separation from the Sun occurs on the 4th of July and Mercury is well placed for early risers the entire first full week of July. Capella will rise first in the northeast, followed by Aldebaran, and then Mercury in the east-northeast. In fact, Mercury will look like one of the bull’s horns. On the morning of the 7th, Mercury is closest to the horn star, Zeta Tauri. The waning crescent Moon is also to the left of the planet at this time, rising at the same time. Mercury then heads through the foot of Gemini and is tough to see by the last week of the month.

The Earth reaches the furthest point from the Sun in its nearly circular orbit on July 5th. If you’re keeping score, we’ll be 94,510,886 miles from our nearest star at right about dinner time.

And the Delta Aquariid meteor shower peaks on evening of July 28 and into the morning hours of the 29th. Last quarter Moon occurs on the 31st, meaning we’ll have a bright waning gibbous Moon brightening the sky during the morning hours, which isn’t good for meteor watching. Still, the shower really runs from July 12 through August 23 so you still might see a few even if the maximum isn’t ideal. At the max, 15-20 mete-ors per hours are expected. Good luck!

Did you see Mercury last month? I believe we had a clear night on May 13 and the Moon was beautiful to the left of Mercury. I hope you saw that. Mercury is no longer in the picture (well, not like it was in May) and, in fact, it will pass between the Sun and the Earth on June 10 to slip into the morning sky. Mercury will ascend in the morning sky though it’ll reach its greatest separation from the Sun early next month. Early risers may see it at the end of June but don’t mistake it for the star Aldebaran – they’ll be relative close in separation and brightness.

Back to the evening sky. Venus is still in the process of making a slow ascent from the horizon. At the beginning of June, it sets at 9:45pm CDT, a bit over an hour past sunset. That stretches to about 95 minutes at the end of June. Venus comes pretty close to passing over the rich star cluster, M35, in the foot of Gemini, but the sky will be too bright to see the cluster. Look for Venus low in the west-northwest. At magnitude -3.8, you don’t have to wait that long after sunset to start looking. A thin crescent Moon is just below and right of Venus on the evening of the 11th (pictured here) then midway between Venus and Mars on the 12th. Note this month how the separation between Venus and Mars is decreasing. By the end of June, it’s about 7.5 degrees. On the evening of the 24th Venus is in line with the stars Castor and Pollux. 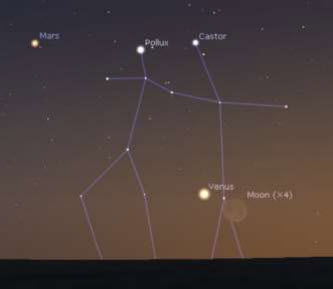 Mars is pretty faint (well, for Mars, anyway) at magnitude +1.8, but Mars does something cool this month. Easily locate Mars on June 13 since the crescent Moon will be right above it. Then keep an eye on the planet with binoculars. On June 23 Mars will cross in front of the Beehive Cluster in Cancer. Granted it’s not high in the sky but if you can find a good, unobstructed horizon, you got a good shot. Mars will look like an extra “star” in the cluster but, of course, the cluster is well over 15 millions times further away!!

Jupiter and Saturn are still in the morning sky but, in mid-June, they’re both above the east-southeastern horizon by just after midnight. By sunrise, they are closed to being on the meridian. On June 1, a roughly 3rd quarter Moon is just below Jupiter but the scene repeats itself near the end of the month. The Moon is near Saturn on the morning of the 27th and then below and between the two planets the next morning.

Besides Mars in the Beehive, diligent observers might look for the brightest asteroid, Vesta, among the stars of Leo. It’ll be about magnitude +7.6 so you’ll need binoculars at minimum. It’s nice when asteroids are near stars. Start with Theta Leonis (one of the Lion’s back legs) and go past the galaxies M65 and M66 to the star 78 Leonis (magnitude 4). See the next page for a chart. Vesta is between two stars at magnitudes 5.8 and 6.5. Now the key to finding an asteroid is to watch over a couple of nights and look for movement. There’s a reason why the name “asteroid” means “starlike!” 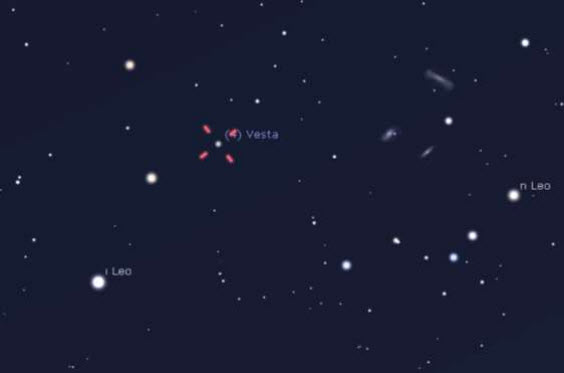 We also have an annular eclipse coming up on June 10, though the path of the Moon’s shadow goes over both the Earth’s geographic and magnetic poles. Eastern Canada has probably the best view for a inhabited area. Will we get to see it here? Maximum eclipse occurs while it’s still dark here. You may get
to see some or the Moon exiting the Sun disk right at sunrise on the 10th. Now if you try, USE ECLIPSE GLASSES! DO NOT look at the Sun with just your eyes! The entire eclipse is over around 8am.

Oh, yeah, and happy summer, too! The summer solstice occurs on Sunday, June 20, at 10:32pm. That is when the Sun is over the Tropic of Cancer. We’ll have our longest day and the Sun will be at its highest at noon (though not straight up). I got into a bit of a “heated discussion” with a couple of meteorologists who claim summer begins June 1 and they “have the data to prove it.” I haven’t seen the data yet. The calendar is so arbitrary. Whether you like the solstice or not, it’s a definitive date and time! I suppose in the long run it really doesn’t matter, right?